Demolition is scheduled for next year. The Nakagin Capsule Tower, a famous building 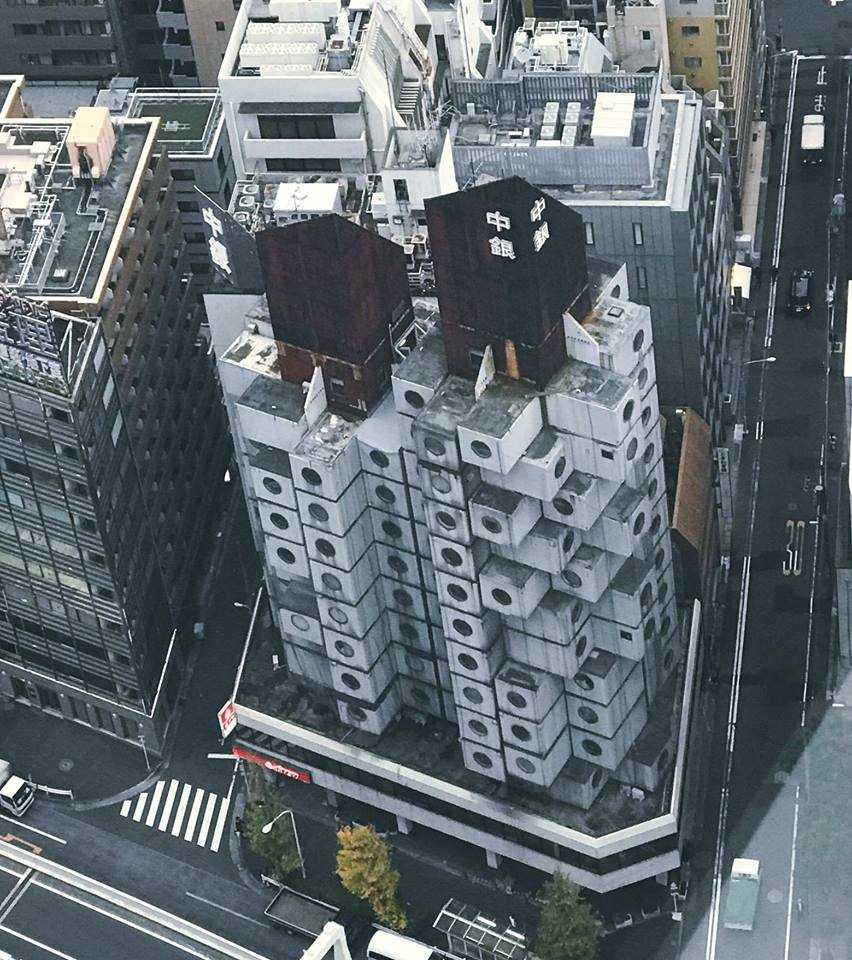 The unique work of the famous architect Kisho Kurokawa, the Nakagin Capsule Tower, still stands in Ginza 8-chome, Tokyo, and can be seen from the Tokyo Metropolitan Highway.
It was decided to demolish the building next year because it is very old and no major repairs have been made since it was built in 1972.
The Nakagin Capsule Tower will only be visible for a short time.

In a capsule of about 10 square meters, the most modern bathrooms, shelves and other necessary items were built into the capsule like a puzzle. There are 140 of them attached to the tower.
The round window is a feature of the building, which was inspired by a tea room.
Each capsule was supposed to be removable, so that when it became obsolete, a new capsule could be inserted or the entire capsule could be transported.
In fact, however, no capsules were removed.

Each capsule has its own owner and there is a management company. There were differing opinions because of the high cost required for repairs.
They had sought sponsors to maintain the site, but were unable to do so due to the Corona pandemic and had to make the difficult decision to sell the property.
The exact schedule for demolition next year has not yet been determined.
So there is still a chance to visit the Nakagin Capsule Tower.

My small travel agency can arrange an English speaking tour of the Nakagin Capsule Tower.
We will be able to offer the tour in October 2021, but we are not sure if we can do it in November, so we need confirmation.
If anyone is interested in joining the tour, please contact us as soon as possible. 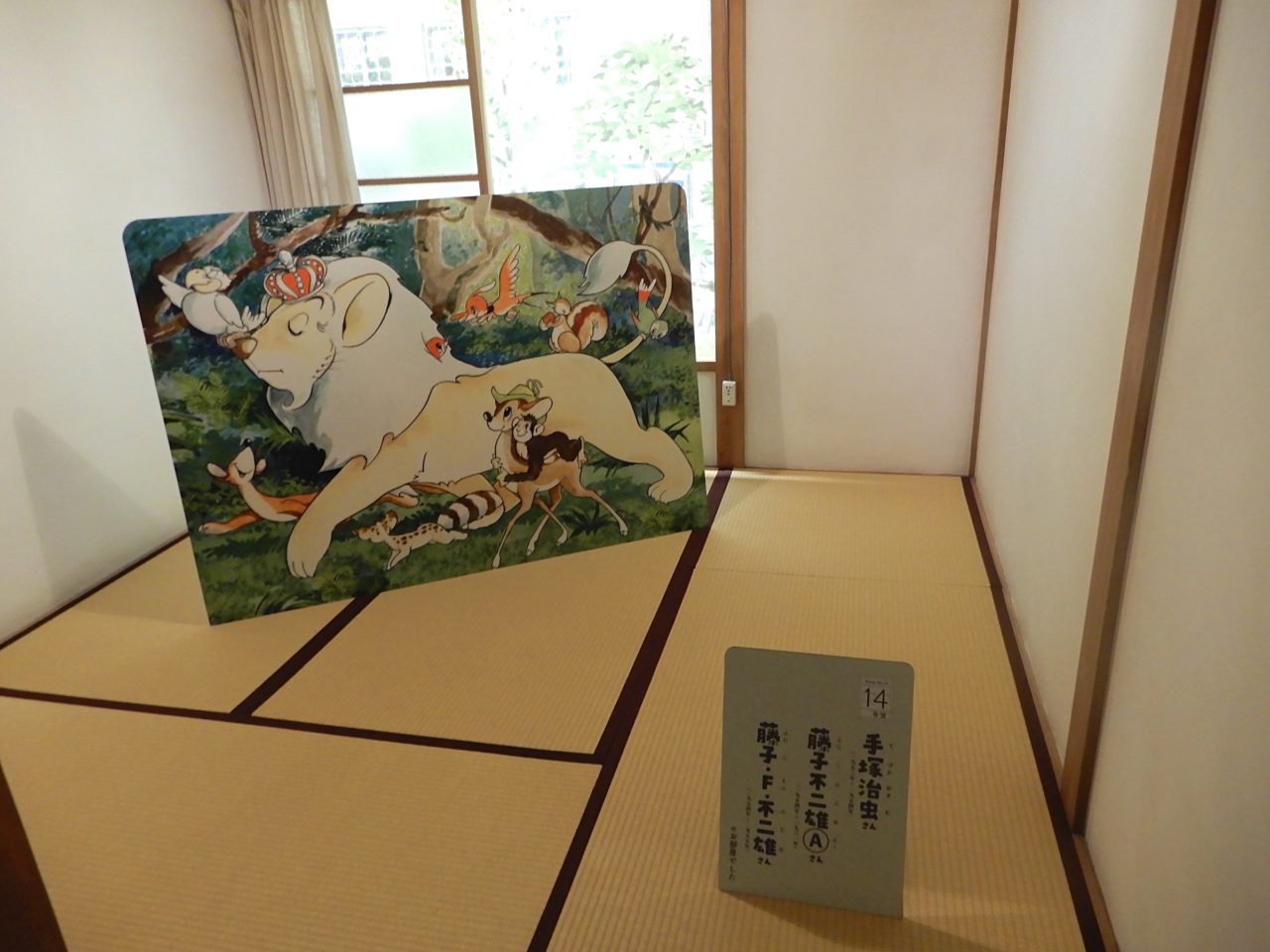 In Toshima-ku, Tokyo, there used to be a famous residence where famous manga artists such as Osamu Tezuka, Fujiko Fujio Ⓐ, Fujiko F. Fujio, Shotaro Ishinomori and Fujio Akatsuka lived. Unfortunately, the Tokiwa-so was demolished in December 1982 due to age. It was a two-story wooden building constructed in 1952, shortly after World War II.
Today, a small monument stands on the site.

After that, local citizens who loved the Tokiwa-so began to talk about the possibility of restoring it. Many donations were collected, and on July 7, 2020, the restored site was opened as the Tokiwaso Manga Museum of Toshima City. It was originally scheduled to open in March of that year, but the opening was postponed due to the Corona pandemic.

The reconstruction of the Tokiwaso is extremely elaborate, and every detail is reproduced exactly as it was then. It is truly “otaku.” (Here: faithful to the original) The community restrooms and kitchens give the illusion that the young manga masters will come in at any moment. Famous works were created in each room, which served as a place for manga artists to work and live. Even the scenery you see from the windows has been designed to make you feel like you’ve stepped back in time.

By the way, special exhibitions are often held on the second floor of the Tokiwaso Manga Museum. You should not miss these, as there are some valuable manuscripts on display. Until September 5, 2021, the exhibition “Tokiwaso and Tezuka Osamu: The Time of Kimba the White Lion” will be on display. You can see Tezuka Osamu’s precious handwritten manuscripts up close.

Osamu Tezuka, as you know, is a manga master known for many works such as “Astro Boy”, “Kimba the White Lion”, “Black Jack” and “Phoenix”. I believe that almost all manga artists and animators working in Japan respect Tezuka Osamu.

Currently, the Tokiwaso Manga Museum has a system in which reservations have priority.
Reservations can be made through the website. 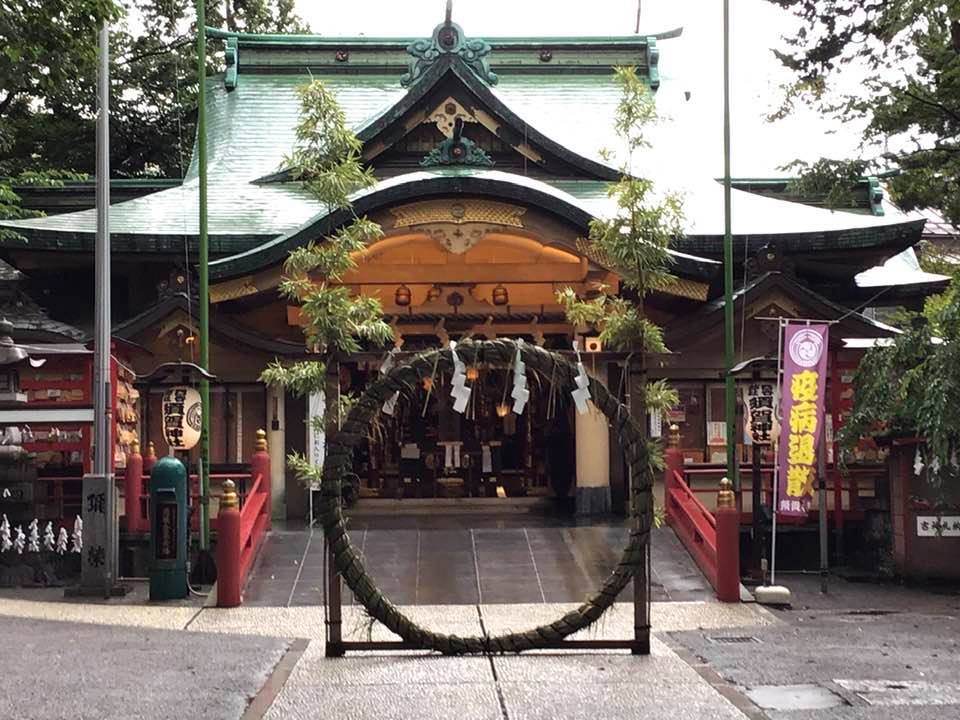 Every year at the end of June, a “CHINOWA” is placed at the shrine.
It is a ring made of plants and is large enough for one person to pass through.
The plant is CHIGAYA. It is a tough grass in the Japanese rice family.

The worshippers pass through the CHINOWA once to the left, once to the right, and once again to the left, before proceeding to the shrine.
In this way, the impurities of the past six months are purified.
On June 30th, there is a ritual called “Nagoshi no Oharae” (summer purification ceremony), where the priests offer prayers.
They pray for everyone’s health. 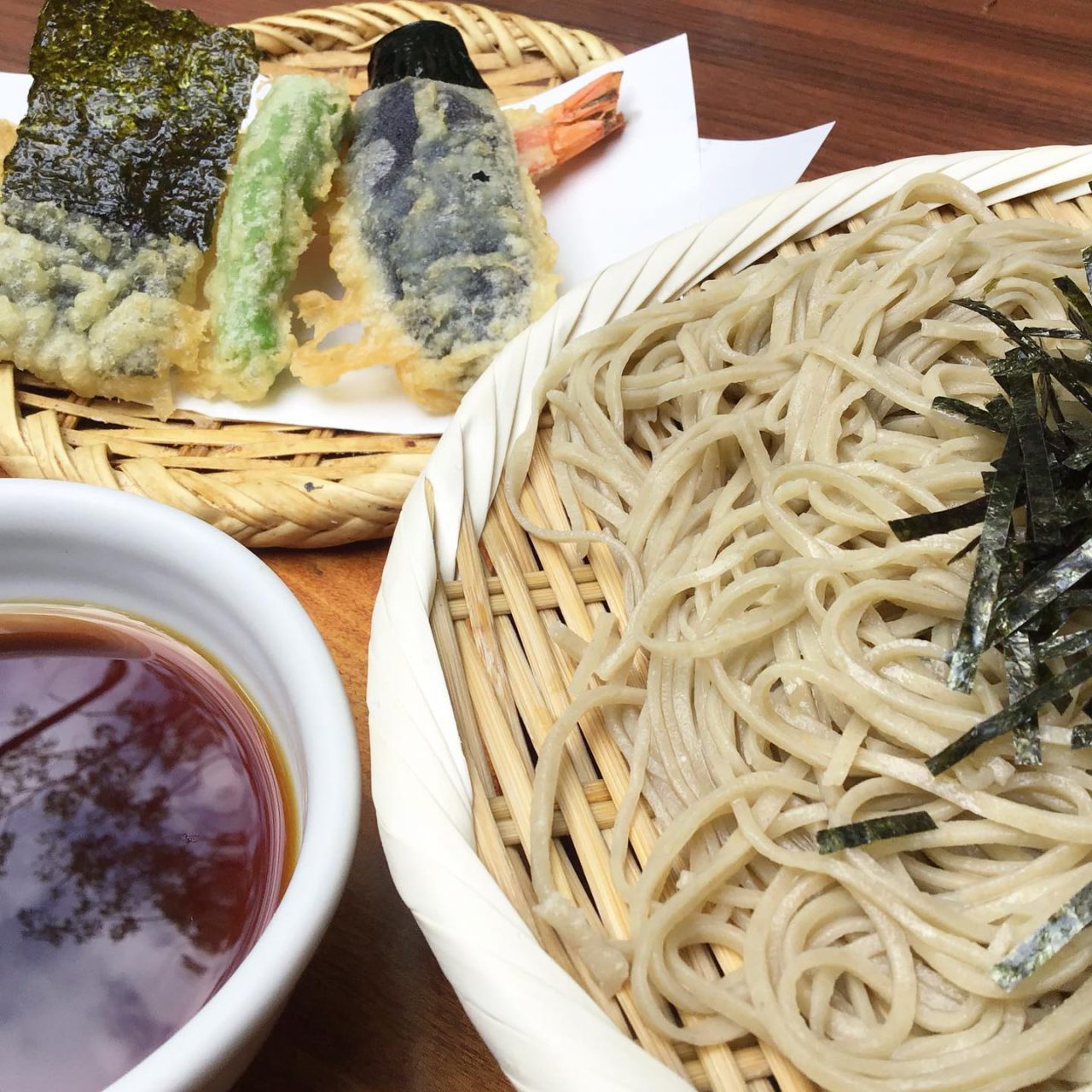 Jindaiji Temple is located in Chofu, a suburb of Tokyo.
Nearby, there is the Jindai Botanical Garden.
Therefore, you should take lots of time here to enjoy the walk.
This temple was founded in 733.

The specialty of this place is soba noodles.
There are many soba restaurants around the temple.
The soba here is exceptional. 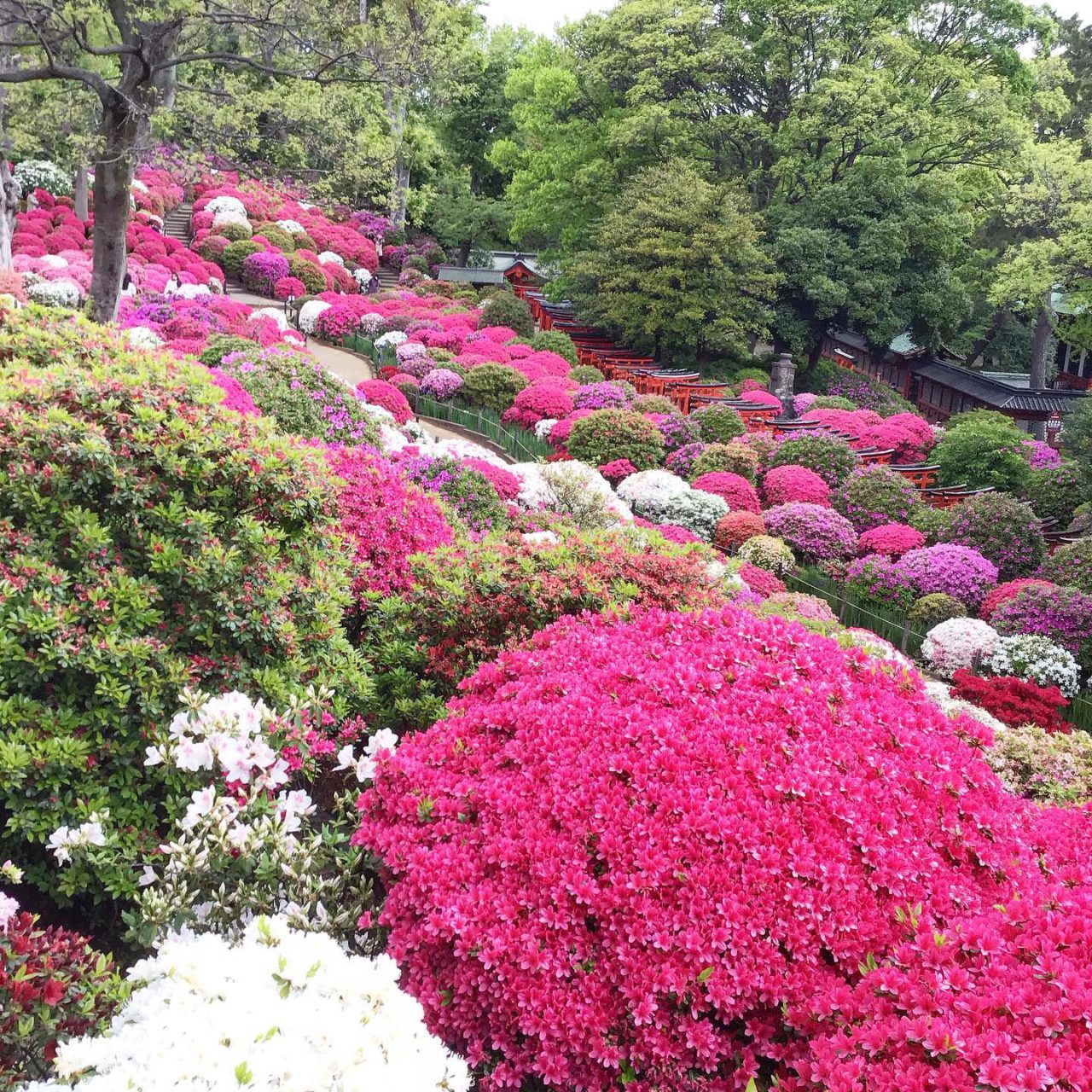 Nezu Shrine is an old shrine in Tokyo.
It is so old that we do not know when it was founded.Supposedly, it was 1900 years ago.

By the way, this shrine is most beautiful in April.
The azaleas bloom in abundance, looking like red and pink candies.
Every year, many visitors come here, but this year was different.
That’s why it’s so quiet.

Takaosan,the Mountain with the Tengu 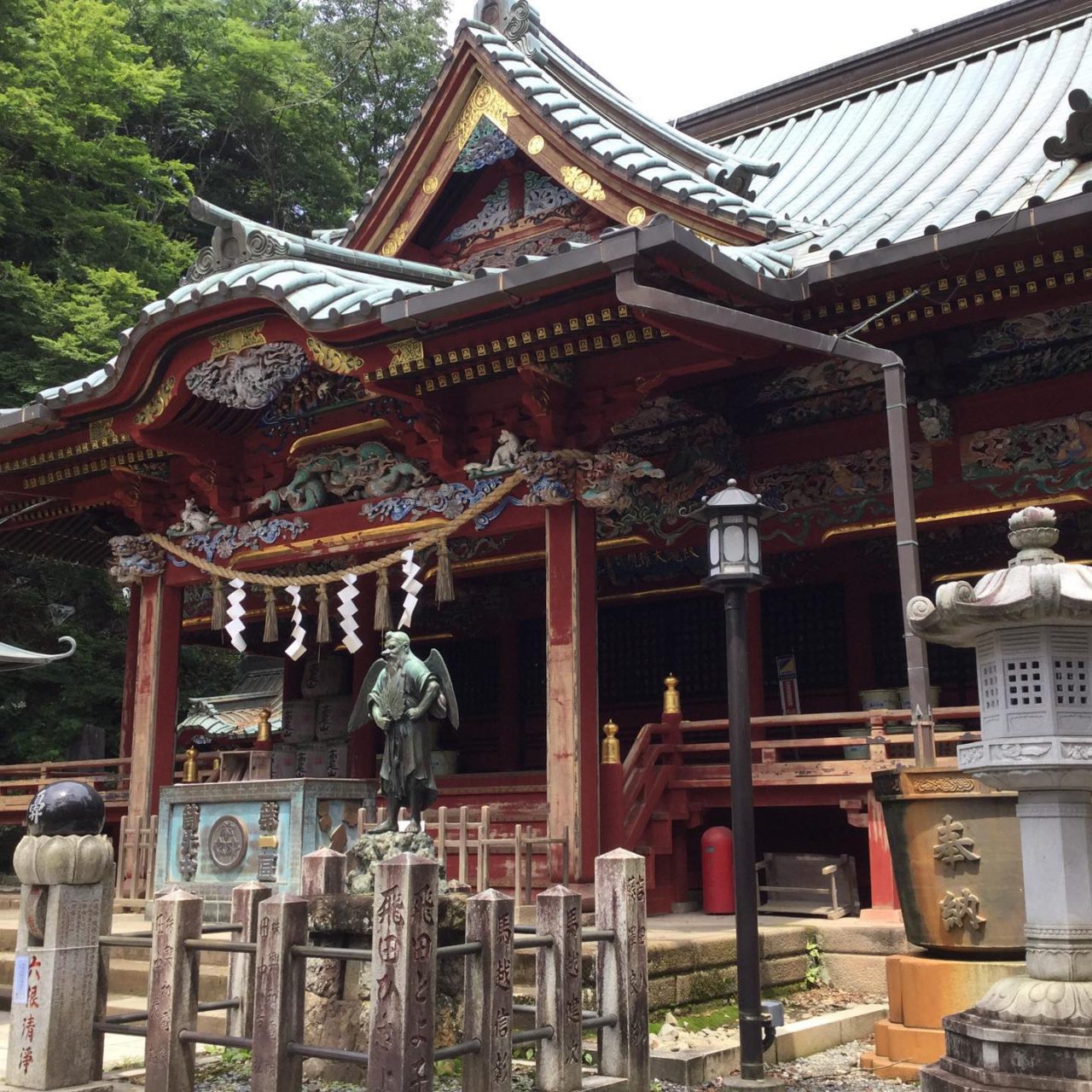 Takaosan is a 599 meter high mountain.
And it is located in Hachioji, Tokyo.
It is a mountain that is easy to visit from the city centre.
Many travellers like to hike in this mountain.

In this mountain there is an old temple.
It is called Yakuo-in and was created in the 8th century.
The symbol of this old temple is a Tengu.
It is a kind of Japanese youkai or genie.
The Japanese consider the mountains to be mystical.
That is why we think there is a Tengu here. 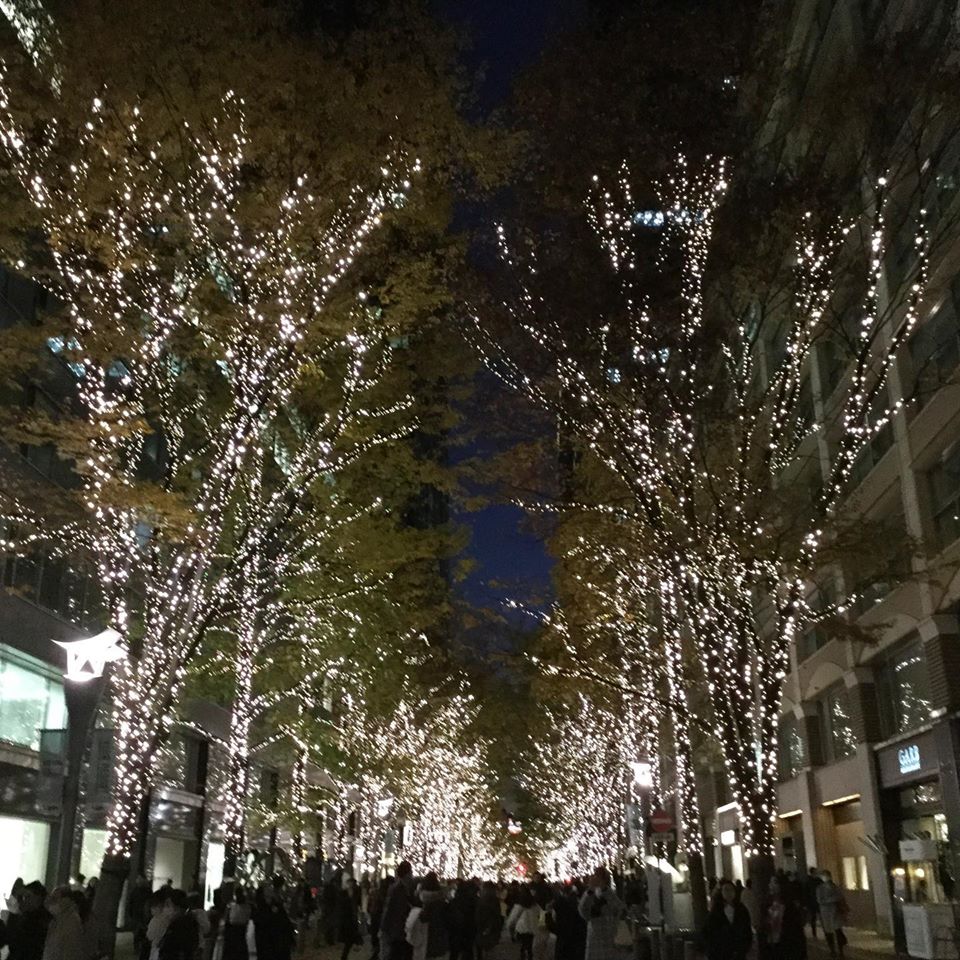 Every year, from the end of November, Tokyo is beautifully decorated with electric decorations.
In many downtown areas, you can see them.
Especially, Marunouchi is very beautiful.
It is located in the immediate vicinity of Tokyo Station and is easy to access.
If you are in Tokyo by February 16, 2020, please visit there.
It starts at 17:00 in December and 17:30 in January and February. Nippori is a downtown of Tokyo.
There are a lot of shops that specialize in textiles.
They are also professional shops, but anyone can shop there.
There are more than 90 stores there.
Of course, the number of products is enormous.

If you enjoy window shopping, that’s fine too.
But if you want something, you should investigate in advance.
If necessary, ask to us.

Message from our Customers:Tailor-made tours in Tokyo My little travel Agency is a startup.
But I have great customers and excellent business partners.
I am very happy.

I got a great message from our customers.

Thank you so much!

STAY  AND VISIT TO TOKYO
At the beginning of June we spent a few days in Japan’s capital city. The
program was organized by the Kaguya Reisebuero and it has everything
worked out excellently.
We had an excellent guide and spent very good time in Tokyo.
Overall we were very satisfied and would like to recommend this office!
Marianne Brix and Elfriede Hotko from Vienna (Austria).

Concierge for your travel
http://kaguyareisebuero.com/plans/83 I saw a samurai event in Ota Ward, Tokyo.
Nitta Shrine is a shrine for samurai.
People are proud of it.
And they make a parade of samurai.

These samurai are ordinary citizens.
Their costumes are theirs.

Samurai are not only Japanese.
Foreign citizens are also samurai. 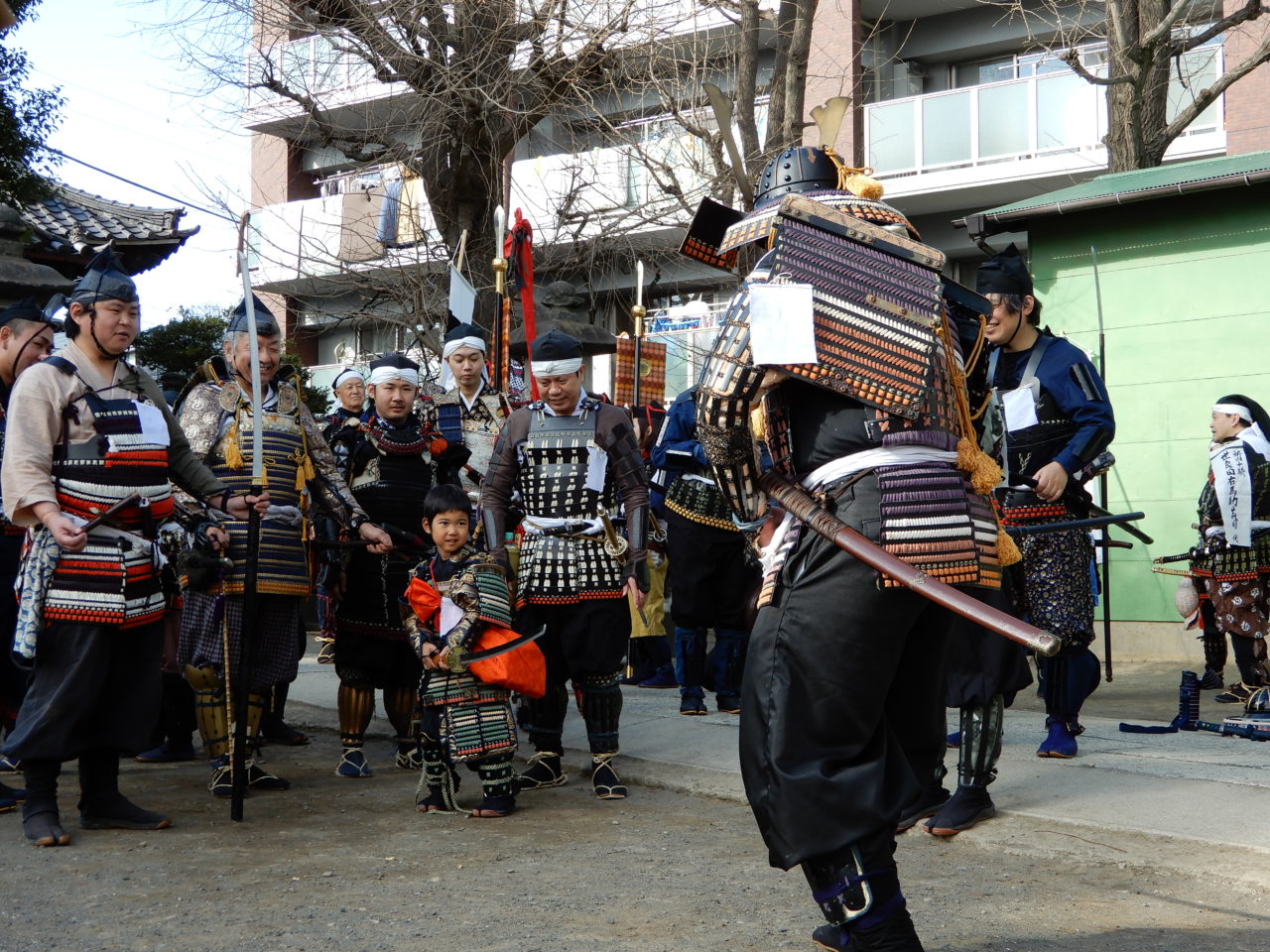 Nakagin Capsule Tower is located in Ginza, Tokyo.
Japanese architect Kisho Kurokawa built it in 1972.
It is a residential and office building.
It has a unique shape and has a lot of square capsules.

However, it is a crisis of the demolition now.
Architecture enthusiasts around the world don’t want that. 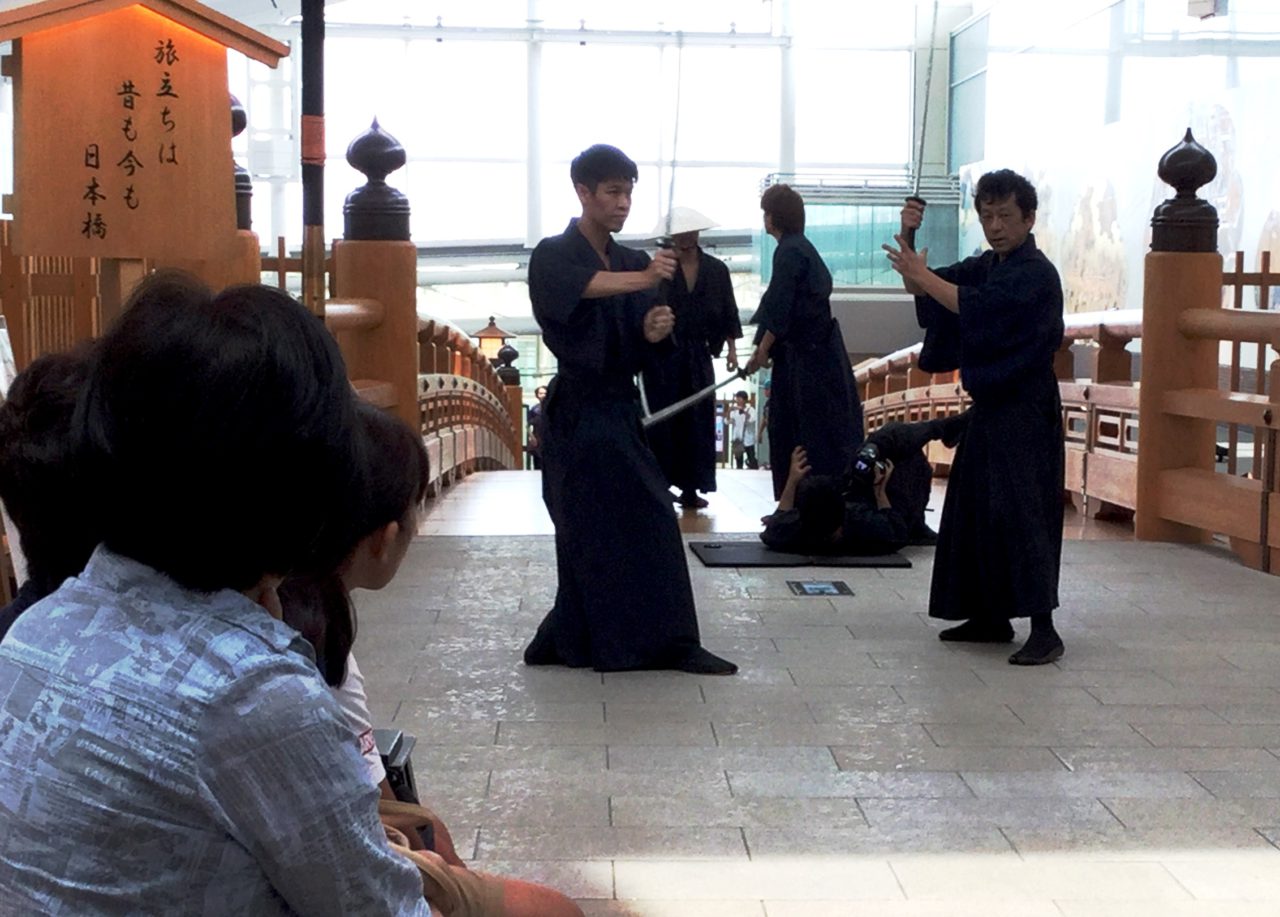 This is Haneda Airport international terminal.
A real stunt man teaches Samurai action.
Do you know the movie”Rurouni Kenshin”?
A samurai manager appeared in this movie.
After practice, he takes a movie for you. The inner market will move to Toyosu on October 11.
There are a lot of tourists, so professionals are in trouble.
Now, tourists can enter here from 11:00 a.m.

But the outside market welcomes tourists.
It is here after October. 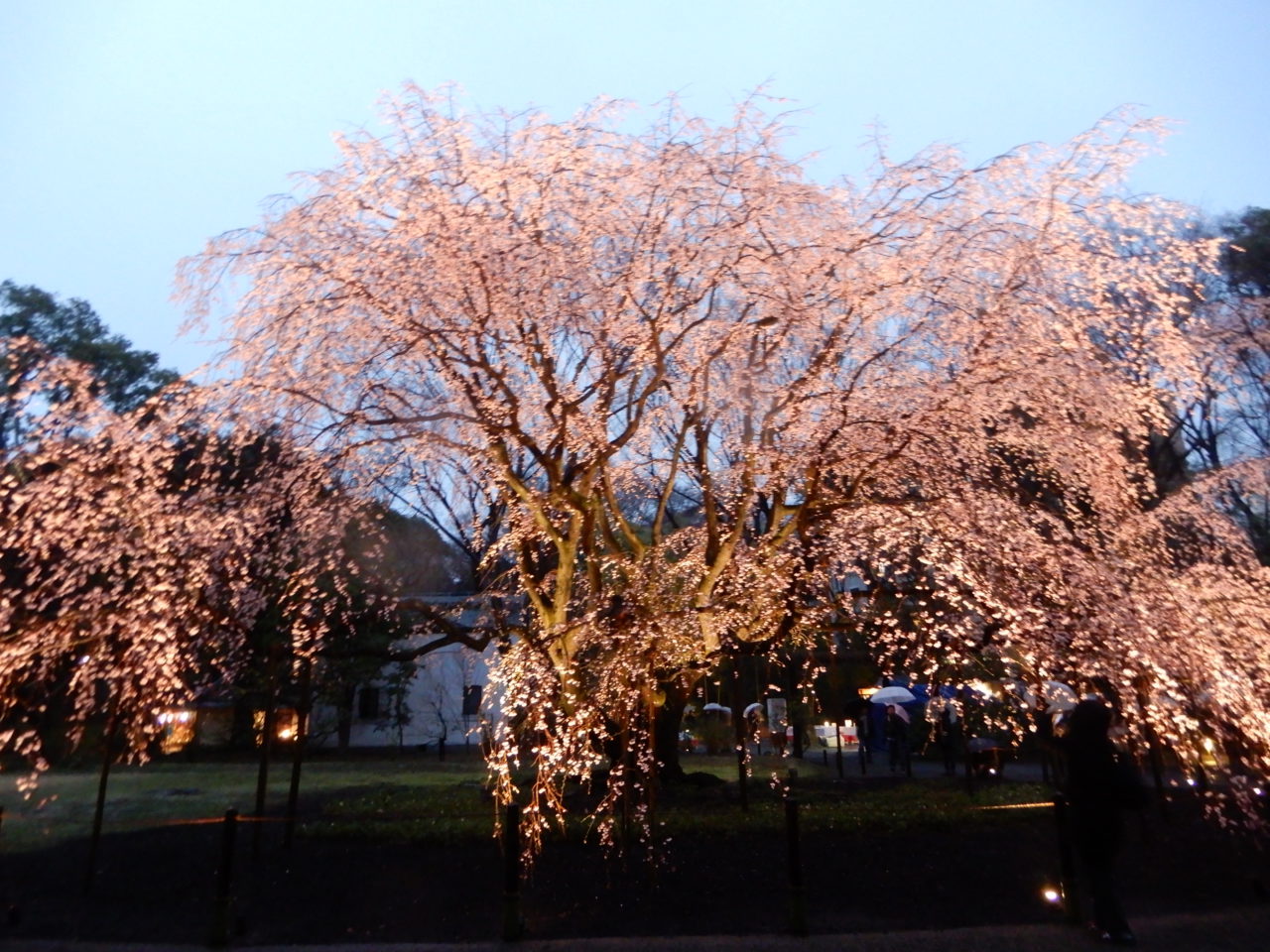 We often see cherry blossoms at night.
Those are fantastic. There are Flying Penguins at Sunshine Aquarium in Ikebukuro,Tokyo.
This aquarium is on the roof of the 11th floor building.
Here you can see the penguins as well as many fish and sea animals. Tamura Shuzojo (sake brewery) is located in Fussa, West Tokyo.
It was founded in 1822.

There is a big ball at the entrance to the sake brewery.
This is made of cedar leaves.
It is renewed once a year.
It is November at the new sake season.

The god of sake is enshrined in Omiwa Shrine of Nara .
The shrine has many cedars.
This big ball is an amulet. 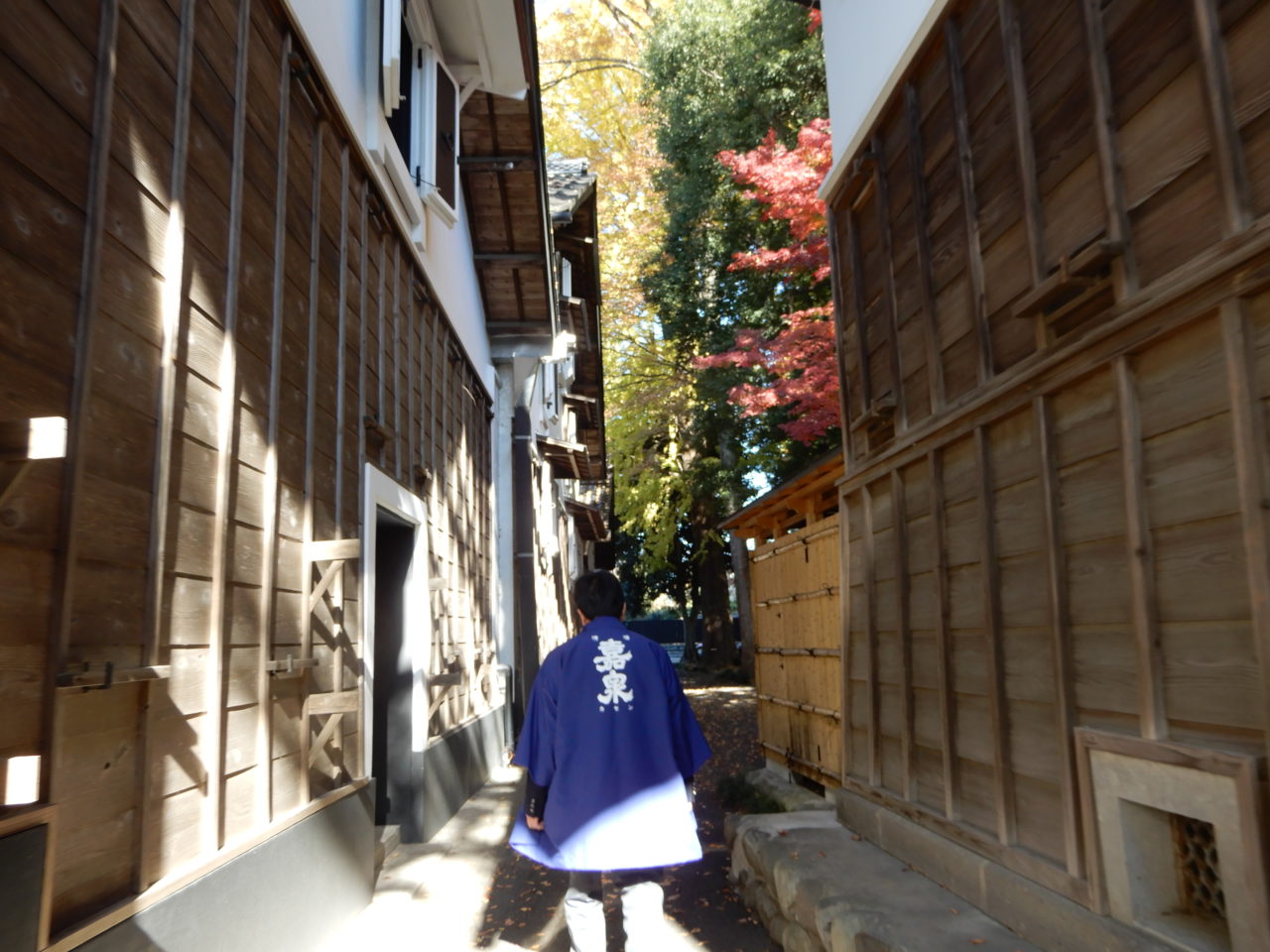